Meen Pollichathu, (Roasted fish in a banana leaf wrap) is a must try local delicacy generally prepared with fresh Karimeen (Pearl Spot) or Seer fish. The anecdote of foreigners mispronouncing "Meen pollichathu" as "meen polli chatthoo" is a popular one- the former translating as "roasted fish" and the latter meaning "the fish burnt to death"!

It is one of the most sought after dishes from the traditional cuisine of Central Kerala; the recipe being born in the homes of Malayali Syrian Christians. The fish is marinated to lend it a tangy taste, fried and sauteed in a ground paste of onions, ginger, garlic and tomatoes and later cooked inside a banana leaf.

Once the banana leaf is opened one's nostrils are assaulted with the spicy aroma of the fish and the fresh fragrance of curry leaves. Beneath the layer of gravy, the fish will be cooked to perfection and the all the flavors from the various spices and the marinade would have seeped into the flesh, making each melt-in-the-mouth bite a yummy firework! 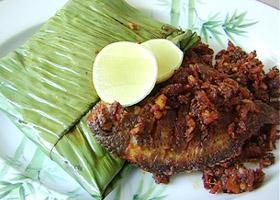 Ingredients for the wrap:

Clean the fish thoroughly and cover with marinade. Keep aside for a few minutes. Shallow fry in coconut oil.

Chop all the ingredients for the gravy. Heat two tablespoons of coconut oil in a pan and add all ingredients except tomato. Add the chopped tomatoes once the mixture turns golden brown and cook slightly. Apply this paste on the fried fish.

Mildly wilt a fresh and washed banana leaf by keeping it on a low flame, then cover and wrap the fish completely by folding the leaf. Boil the wrapped fish in coconut milk for a few minutes and serve hot.
Posted by Unknown at 04:55